well what a way to kick off the year,we where promised a big night by Floyd Mayweather and Eddie Hearn and we weren’t disappointed .

As a starter before the main course we had Jose Pedraza v Gervonta Davis for the IBF  super-featherweight title , a fight i had been intrigued by as it was my first time seeing Davis after hearing he was a top prospect but against Pedraza he was testing himself at a whole new level, refreshing for a lad of just 22 . Right from round one Davis looked to settle quickly, also sending a warning shot to Pedraza with a beautiful upper cut that he had came to win. As the early rounds went by anytime Pedraza tried to get his jab working he would be caught with by Davis ,backing him up ,Pedraza just couldn’t read these awkward shots from Davis .It looked as if Pedraza was trying to let Davis gas himself , which for me was crazy and letting the youngster build up an early lead, whilst landing some big shots . By round four Davis was still unloading and obviously trying to finish this one early but now Pedraza was having his success landing on Davis body also postuturing at every opportunity trying to get under Davis skin .At the halfway mark it looked as if Pedraza had sussed he could get to Davis on the inside and had some success there, but it didnt take this talented youngster long to work it out and he really shook Pedraza up with a beautiful left hook to the body then another to the head , by now Pedraza must have known this was slipping away. The victory came for Davis in the seventh,by this point there was very little coming back from Pedraza . Davis was ruthless with his bodyshots then switching to the head with unbelievable accuracy and it all eventually became to much as Davis sent Pedraza to the canvas thru the ropes and altho he made it to his feet the ref has seen enough . What a performance from this lad and what a way to announce yourself to the world, on this evidence there is plenty to come from Gervonta Davis and i can’t wait to see him in action again .

Time for the Main event, Badou Jack v James DeGale for the IBF and WBC super middleweight titles . In my preview i had picked DeGale saying he would have to much skill for Jack , and as the fight started thats how i looked like it would turn out . DeGale start quick and was moving well in the opening round against a cautious looking Jack . going into the last 30 seconds of the round DeGale sent Jack to the ground with a well timed over hand left which caught Jack off guard , even tho Jack was up quickly and didnt look hurt, it was a wake up call that he was going to have to slow DeGale down . Regaining his composure in the second round, Jack started to turn the screw by the third, landing some nice bodyshots which would pay back in dividends towards the end of the . Going into the middle rounds it was Jack who was really establishing himself , his bodyshops landing with great power and accuracy which was noticeably  taking the wind out of DeGale . When DeGale was landing most of his work seemed to be coming off Jacks gloves and arms , DeGale seemed to be taking a lot shots flush which was snapping his head back whilst only landing tapping jabs . Before this fight i had said i think DeGale could get to Jack on the inside , but it was Jack who looked the better and landing big on the inside . At round nine DeGale had to try and stop this onslaught from Jack and DeGale did show his class with a big round but altho he was landing more ,the quality of Jacks work was far superior. This late rally from DeGale set us up  for a nail biting finish,even tho Jack had dominated most of the fight that knock down in the first round could prove to be the difference . As both came out there corners it was clear that DeGale was a spent force , his face was in a hell of a mess and his legs looked heavy , in contrast Jack as ever was there showing no signs of slowing .After trading some early blows you could see Jack had lost respect for any power DeGale had and was ready to lay it on him hard . Jacks Hard work paid off sending DeGale to the canvas, as DeGale got up you could see he needed the bell, he had nothing left to give and was in survival mode as the relentless Jack went looking for the KO , the end came with both going toe to toe in the middle of the ring , what a fight this was from start to finish . For me there was only one winner, the tempo,quality and accuracy of Jacks work was far better than DeGales and when the judges scored it a majority draw i couldn’t help but feel for Badou Jack ,it was a close fight but Jack for me was the clear winner 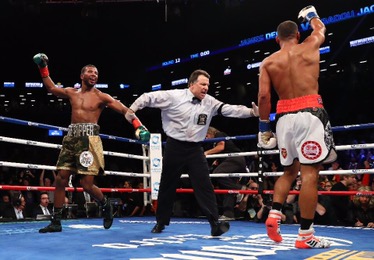