The good people of the jury, I intend to prove beyond all reasonable doubt, that the three accused are bringing the good name of Boxing into disrepute through what can only be described as corruption, blackmail, bullying and down right fascisim . 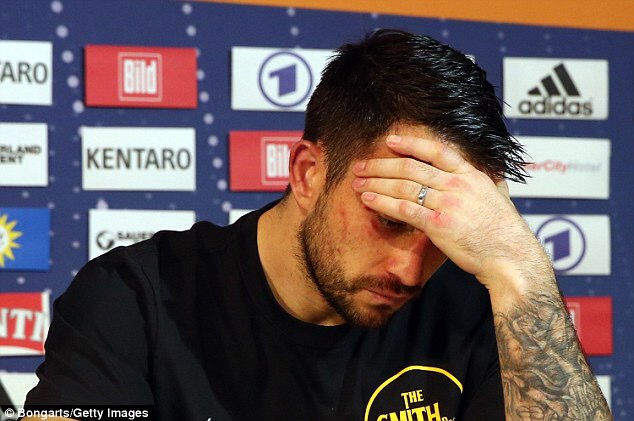 I will start presenting my case with Paul “The Unworthy” Smith . This man is in line to fight for the WBA Super Middleweight Title (Regular) by doing nothing of any relevence since taking on Andre Ward in 2015. Even then, Smith missed the 172lbs catchweight by a massive 4.4lbs, drawing P4P superstar Ward to call him “unprofessional”. Not that it made any difference of course, as Andre Ward took him to Skool before stopping him. Since then, Paul Smith has had 3 fights (sorry not just three fights but three 6 round fights) with his opponents, having combined losses of just 68, and Smith still managed to take one of those fights to the scorecards (recompose after laughter). To me and most other people, Paul Smith is a domestic level fighter. This is not an insult, in fact Paul Smith WAS a really good domestic level boxer, but the pinnacle of his career was in the 2014 Title fight against Arthur Abraham. He put in a good account of himself and lost the fight on the cards but since then had been in rapid decline until a few weeks ago, when the most remarkable thing happened . 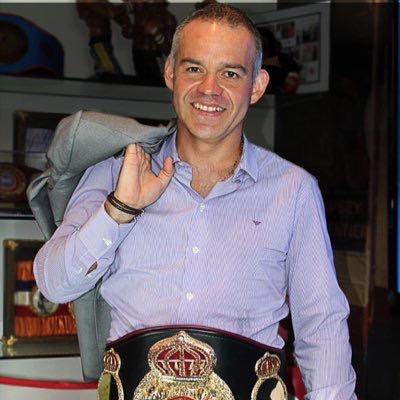 Now lets have a look at Mendoza and the WBA’s role in this crime. Whilst I was on the WBA website, seeing how high a good friend of ours David Brophy was ranked at Super Middleweight, after David went to Australia and stopped Zac Dunn (a top 10 ranked guy with 4 governing bodies) there it was staring me back in the face ……No5 Paul Smith? Two places above No7 Arthur Abraham, five places above commonwealth champion No10 David Brophy. Now ladies and gentlemen of the jury, I know what you must be thinking “its obviously been a mistake” as I thought this myself “how can a guy who’s done nothing in years be ranked so high?”. In this digital age, you may even have thought that the WBA had been hacked and this was a hilarious prank by some cyber geek (again this had also crossed my mind). Fast Forward a few days and ALL becomes clear from this cloud of corruption. Whilst going through my timeline on twitter, I see the news has been dropped

Now usually with things this shitty in boxing, you get angry, then that turns to laughter. Not this time. After seeing this, the anger turned to rage . Seeing what guys like David Brophy go through to get ranked, in the hope that one day the phone will ring with an offer to go fight for a World Title. For all the sacrifices made in and out the gym to not only go unnoticed but actually treated with contempt by a Governing body and there President, by giving Paul Smith his third shot a title. Now it has took me so long to bring this case against the WBA as Mendoza had said on Twitter that the WBA where going to review this fight. I had hoped a bit of sense and fairness would come through in the end, but then Mendoza’s twitter went cold. He’s not only ignoring the 1000’s of tweets asking about this fight , but he actually took to mocking fans of the sport by quoting there tweets and calling them “bitches” (paraphrasing there) . 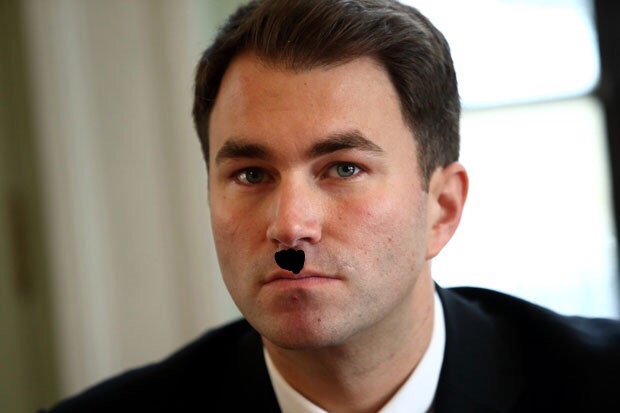 Now that takes me on nicely to Mr Eddie “Adolf” Hearn , who may be last up in my case  but he is certainly the mastermind behind this racket. Mr Hearn is the leader of one the five families of boxing (the other 4 being WBA,WBO,WBC and IBF) who’s power and reach should not be underestimated. If you are not a boxing fan you might not have even heard of this fight, that is because the mainstream boxing/sports media dare not speak up against Hearn or Matchroom. You can say what you want about Eddie but he does put on some of the biggest sporting events in the UK today, and thats his biggest weapon . If the media speak out against Hearn he does have the power to ban them from these shows and there build ups, which is usually are events in themselves . He treats the press like dogs. They do something for him they get a treat, they do something against him they get punished . Eddie Hearn does have one major flaw that this fight has exposed over the past few weeks and thats that he cannot accept any sort of criticism. On Hearn’s last IFL he went on a half hour rant about Tommy “Guru” Allan and Brian King, personally attacking both because they asked co-accused  Gilberto Mendoza to justify Smiths ranking . Then it was my turn, Adolf Hearn had tweeted “anything is possible” and I replied “Paul Smith fighting for a title proves that’. He then went on the attack about how I am a “shit journalist” (for the record I don’t break the news I comment on it, that makes me a commentator) and even after I baited him with Paul Smith name and credentials, he didn’t come forward to his defence. I guess even the mighty Eddie Hearn can’t sell this one to the British public .

Ladies and Gentlemen of the jury, in the court of public opinion, I feel I have put forward the most compelling case …..how do you find the defendent ?

Below i would like to enter Exhibits A,B,C,D as evidence) 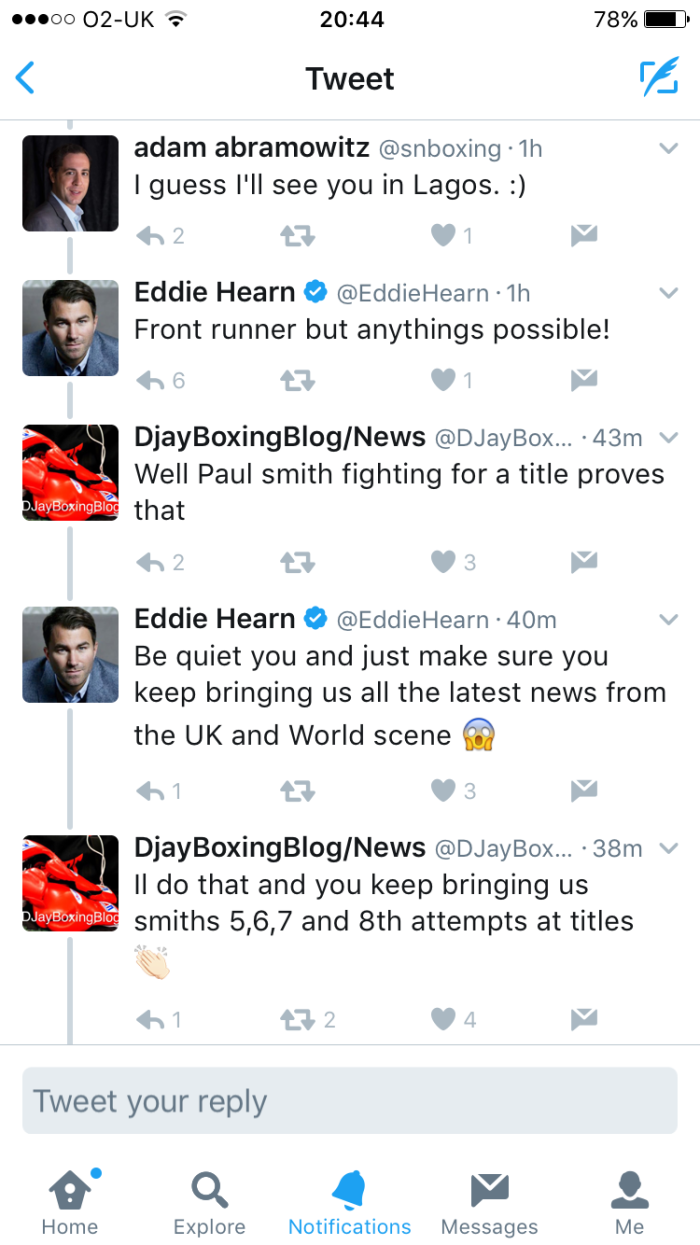 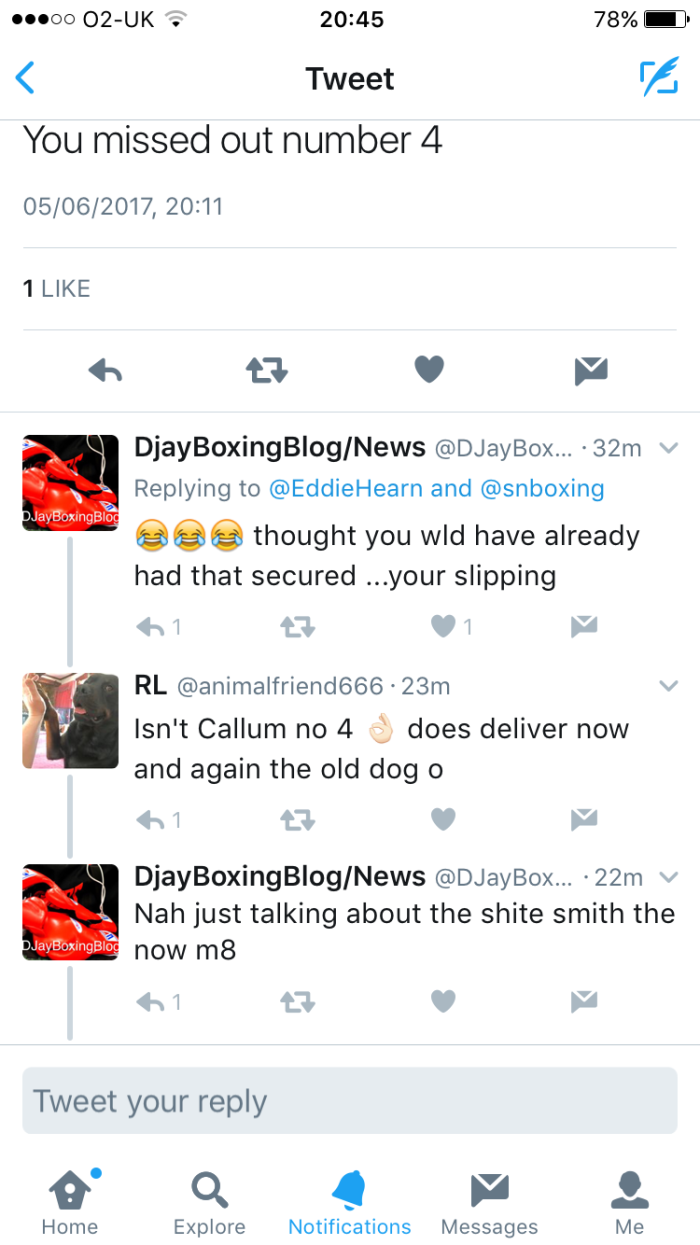 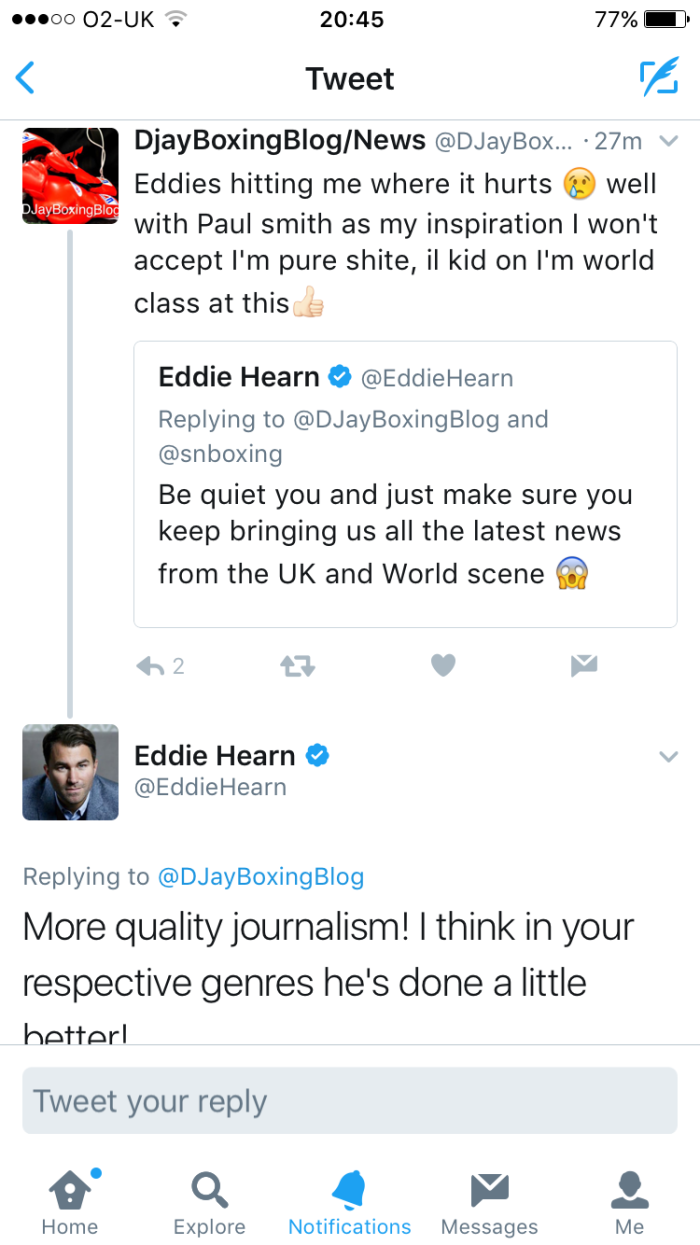 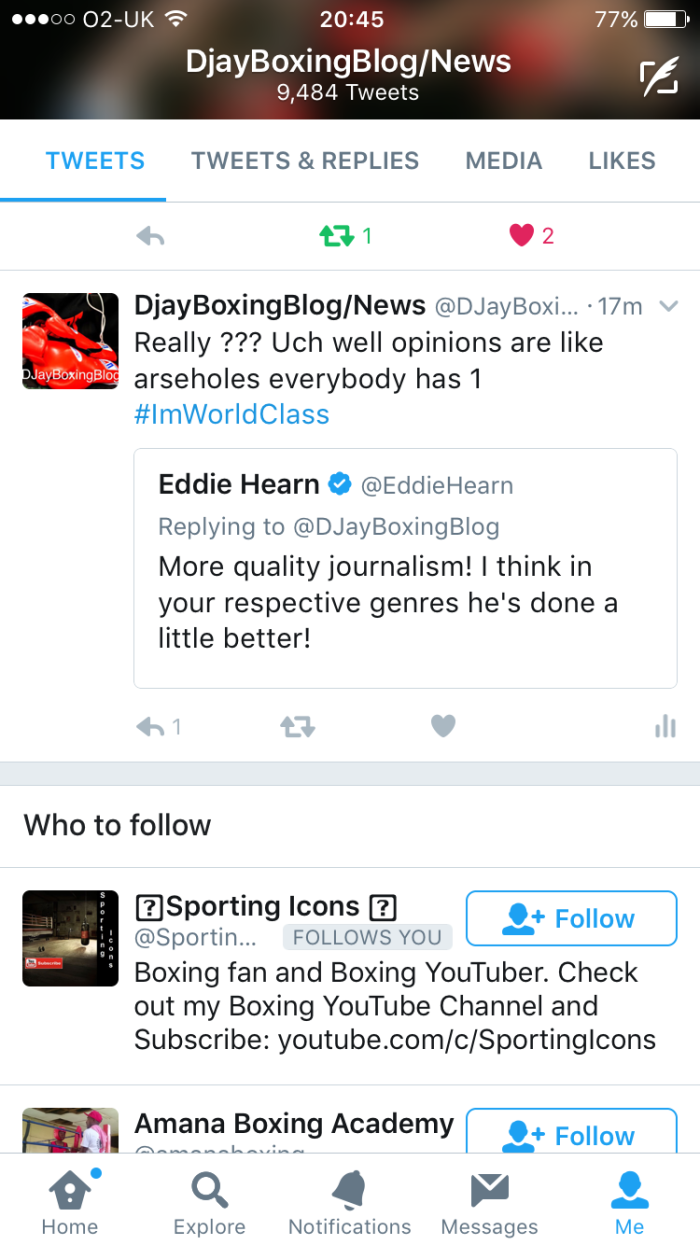