Every sport need’s one vital ingredient to thrive and that is competition . In boxing there is nothing that comes close to watching two evenly matched fighters battle it out to see who can find that extra something within themselves to get the victory . With competition comes rivalries and it is the rivalries that help elevate sport to a global audience . Where boxing is now tripping itself up is now we have promoters following the above blueprint of competition and it is damaging the sport .

Don King is probably the most famous or infamous promoter of all time bringing us some of the most timeless fights of all time , but Don King was a big Lion in a small jungle  . King didn’t need to worry about multiple platforms and online streaming platforms as competition all aligned with different promoters all cash rich from big TV deals . Don King could make the biggest fights in boxing because he could make the fighters the most money , a very simple but effective model which no longer works in today’s game . 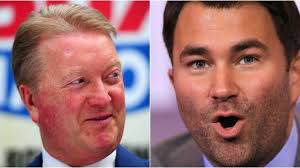 In the past couple of years we have seen boxing explode across multiple platforms in the UK and the US with more TV dates to fill than the sport has ever seen . Now some people may think this is a good thing for boxing , after all competition is good right ? Well not necessarily in this instance . One major flaw is that we will now see boxers put on TV before they are ready due to the amount date that need to be filled  , which will be detrimental to their development  . All boxing fans know how important the small hall scene is to the progression of a boxer . To use an old apprenticeship term “It’s where you serve your time” and like an apprentice you will go to work for a low wage in exchange for an education in your trade . How many young fighter’s will suffer at the hands of promoters only interested in filing TV slots . It is a very real possibility that the standards of boxing show’s will drop dramatically which will damage the sport .

There is another flaw in these massive multi platform deals is that crossover fights will be pretty non-existent . The same reason that see Super fights happen few and far between we will now see fringe world level to mid-level boxers stopped from crossing over . TV dates will trump a fighter progression . What we see is certain promoters trying to corner certain division and keep everything in house which is not healthy . With fighters not being allowed to the cross a divide it will inevitably lead to more one sided fights .

Right now there probably isn’t a better time for a boxer to be a free agent .