This week I was joined by Craig smith and Brendan Gilloly as we spoke about all this weeks big boxing news and previews.

Me and Craig Smith spoke about all this weeks big boxing news including Fury/Wilder off, BJS World title farce and review last weeks action .

I was joined on the pod by Craig Smith as we spoke about Tyson Fury’s deal with ESPN , Where next for Leo Santa and BJS moves up to super middleweight .

Hope is a dangerous thing. We hear all the time from a political class who promise us the world and time after time they fail to deliver but we still choose to continuously self harm with hope because there is no alternative. Boxing is now a place where hope is not a desirable trait.

Back in December the world was treated to one of the best Heavyweight fights in years when Tyson Fury and Deontay Wilder locked horns in the ring for the WBC Heavyweight Crown. The fight ended in a draw but it far exceeded the expectations of most fight fans beforehand. Since then boxing fans have been left wanting to see it all over again, living in hope that this would be one of the few times common sense would prevail in boxing. News broke this week that dashed all of our hopes not only of seeing this rematch but there is now a very strong chance that the top three fighters in the division will not meet in the ring for the foreseeable future.

The Heavyweight landscape is already a minefield of party allegiances but with the latest news that Tyson Fury has now nailed his colours to the ESPN/Top Rank mast in a big money multi fight deal, it has made an already complicated situation ……Well all the more complicated. This is not due to the fighters themselves but the money men and powerhouse platforms behind them.

As i sit here writing this I still live in hope. I hope ESPN and Showtime pull together for the good of the sport. I hope Bob Arum and Al Haymon can now finally bury their hatchet and work together to bring fans another great night of Heavyweightboxing. I hope that Eddie Hearn, Al Haymon and Bob Arum do what’s right and leave the path open for their respective fighters to finally get in the ring and fight it out and see who is No1 in the division, after all that what all boxing fans want. The sad reality is that what boxing fans want and what boxing fans get is two very different things, we are now further away from any of these big fights happening than we ever have been.

Why do we love boxing? ….Well sometimes it’s the skill, fitness and finesse that these guys show in the ring that draw us in. Sometimes it’s watching how these fighters act whilst under pressure, landing shots whilst evading being hit, combining footwork and ringcraft gliding more like a dancer than a boxer. Sometimes it’s watching these guys use a boxing IQ to figure an opponent out over a fight taking those well hidden flaws and exposing them for the world too see. Then sometime we have fights like Bradley vs Provodnikov, a fight which taps into our inner bloodthirsty savage caveman.

Be warned when watching the fight below you will be drawn in by the brutality, the heart and desire by both men, this fight will leave you foaming at the mouth as both men literally land the kind of shots that take time off of careers as well as lifespan’s.

Tim Bradley has taken a lot of criticism over the years from boxing fans due to a gift from the judges in his first fight with Manny Pacquiao, but Tim really is a modern great of the sport. Tim “Desert Storm” Bradley’s CV stands up as one of the best in his era of boxing, with some modern day classic fights on there including the one below. I have heard Tim Bradley say he spent the next 6 month learning how to speak again after this fight with Provodnikov. I’ve heard Tim talk about the depression he fell into afterwards and the strain to put on his marriage and why did he put himself through all of this?……. to prove to US that he was a true champion.

Now sit back and enjoy.

I was joined on the show by Craig Smith as we spoke about all the biggest news this week in boxing including Aj vs Miller confirmed , WBSS, Tank  Davis and much much more.

Or listen here on ITunes

Remember that feeling when you first start out in your new career as a trainee or an apprentice. Do you remember how you stumbled and fumbled your way through those early years never really sure what you were doing or even if you were doing to right. With every year that passed all you wanted to do is get better at your job, the thought of actually progressing your career never enters your mind, you just want to get to a qualified level and eventually you get there. The years pass like they always do and suddenly you start to look up the way, you are no longer satisfied with where you are, you want to take that next step up the ladder, this is where Dillian Whyte is now at in his career.

Whyte may not be everyones cup of tea but no one can deny that “The Body Snatcher” is now one of the UK’s biggest boxing stars. As years go 2018 was an absolute blinder for the 30 year old Brixton man beating former World Champions Lucas Browne and Joseph Parker whilst becoming a PPV star along the way, something of a dying breed now in the UK.

Whyte may have done everything asked of him in the ring but his success was only made possible due to the opportunities Eddie Hearn and Matchroom got him. With the lack of PPV fighters now at Matchroom and Sky demanding Eddie Hearn fill PPV dates Whyte and Hearn needed each other and it paid off big time. There has always been a problem lurking on the horizon that was sure to come to the fore eventually.

Ever since Olympic Gold Medalist Anthony Joshua turned pro he has teamed up with Eddie Hearn and together they have taken British boxing to a whole new level. When it comes to boxing there are few bigger names than the 29 year old Watford man in the sport. Selling out stadiums, massive PPV sales, hundreds of endorsements deals with major brands, Joshua truly is a promoters dream and that leaves Dillian Whyte in an awkward position.

It is human nature that with success comes an inflated ego. That thing that goes past self confidence and becomes an overbearing feeling of self worth. We are now seeing cracks appearing in the Whyte/Hearn relationship. The Brixton man has been open about the idea of leaving Eddie Hearn, even admitting he was flirting with other promoters whilst in the US for Pacquiao/Broner fight. Whyte is at a cross road in his career. He must decided if he is happy to plod along with Eddie making good money but always being the bridesmaid, never the bride or is it time to let his ego fly. At 30 years old Dillion may never be in this strong position again and it is imperative that he plays the right hand here. Eddie Hearn has made Dillian Whyte a very wealthy man, Is Whyte willing to risk all that for a shot at glory.

or here on ITunesDJayBoxing- Beat To The Punch 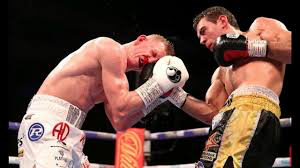 There are thousands of ways too judged a boxer on fight night. You can watch the way in which he/she moves around the ring, you can look out for how they get their shots off or even see how he or she avoids getting hit or reacts after taking a shot.

Last weekend we seen one of matchroom’s top prospects Ted Cheeseman fall way short of the mark in his step up to European Title level against an all but unknown Spaniard Sergio Garcia. Cheeseman who is just 23 years old has taken a lot of criticism in the wake of his first defeat, most of which has been unjust if you ask me. There is nothing boxing fans loath more than a protected fighter, We lose all respect for boxers who will chase mismatch after mismatch to keep the losses on their record at zero. All to often the sport now seems to wrongly put far to much stock in a fighters “0”…..Why?.

I have been lucky enough to interview some great boxers past and present over the past couple of years. One of my favourite interviews I have done is when i had the pleasure of talking to fellow Scotsman and boxing ensyclopedia Alex Arthur. In that Interview Alex tells me that he learned more in in his losses than in any of victories. No boxer really knows just what he/she is made of until they have had the type of fight “Amazing” Alex Arthur had with Michael Gomez.

When watching Ted Cheeseman come up against a more skilled, a more refined and better boxer I couldn’t help but get flashbacks of Arthur/Gomez. Cheeseman stepped up and fell short but I don’t see how that leaves him open to criticism. There is no doubt that Cheeseman was ill equipped to deal with Garcia on Saturday night but no one will know that more than Cheeseman himself. “The Big Cheese” may have lost his “0” but he has traded it for priceless experience at a very good level. Ted has seen where he needs to get to if he wants to take the next step in his career trading that “0” should be something more young fighters are willing to do. I have no doubt this lad will be back looking to fight for the European Title soon but lets wait and see what adjustments this lad makes before we line up to criticise him.