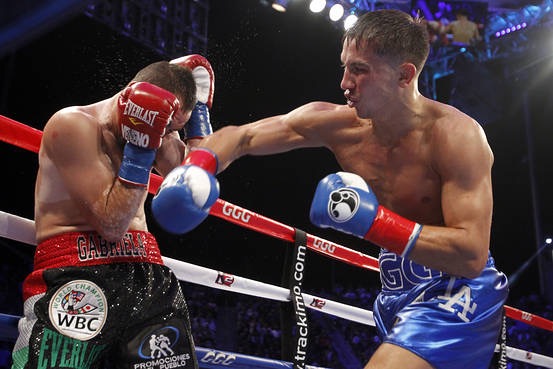 Who would have thought the guru of dodgeball Patches O’Hulihan passed on these words of wisdom in the movie “dodgeball” it would be adopted by boxing champions all over. More and more we boxing fans are seeing the fights we are being fed rather than the fights we want to see, to many champion boxers worry about there belt rather than being the  best in there division.Let’s not beat about the bush here every boxing fan watches fights to see the next Ali vs Fraiser ,Ward vs Gotti or Hagler vs Hearns , these fights are sketched in every fight fans of all ages memory,but in modern boxing these big title battles of two world class fighters going toe to toe to see who is truly the best are fading out of the game. Let’s look at WBA Super and IBF Middleweight champion  Gennady Golovkin vs Canelo Alverez the WBC World Champion,this fight is becoming something of a “batman vs superman who would win?” Sort of thing.It feels like forever this fight has been talked about and is no further forward which just seems scandalas to any self respecting boxing fan .

Alverez is the Mexican poster boy for the WBC, a PPV superstar, so much so Golden Boy who he fights for are pretty much kept afloat by the sums of money Alverez brings in and that right there is a big stumbling block,Golden boy and Canelo would demand a massive percentage to make this fight happen probably around 75% because of how big a draw Alverez is,but listening to Golovkin’s camp the chances are he would agree to this so I actually don’t think Golden Boy are confident there man could beat Golovkin.

Even if Golden Boy would go to the table with a ridiculous offer does Canelo Alverez want the fight ? ….I have serious doubts if he does,Alverez has built a reputation of being a middleweight champ who doesn’t want to fight at middleweight he has opponents drop to a catchweight of 155lbs and wants Golovkin to do the same,this seems to get to Golovkin who says

“I am ready to fight anybody but Canelo isn’t ready. I’ll bring my belt – that’s my style.”

But there is signs Golovkin is starting to drop weight to get himself ready before his most recent fight against Dominic Wade he came in at 164lbs in the 30 day weigh in  when you think that Wade came in at 174lbs , that is a massive sign that Triple G is ready to take himself down to the catchweight.

Let’s be honest we have been waiting over 2 years for Canelo Alverez to take on Gennady Golovkin in this super fight and in my opinion this is going to be another Mayweather vs Pacquiao where we seen about 8 years of stalling with crazy demands on drug tests etc until some hard fights and age took Pacman down a peg or two, I can see Canelo Alverez using these tactics holding back until 34 year old Golovkin starts going down hill before taking on this fight all designed to give the impression of wanting to be the best but actually trying to cheat there way to that title buy putting there oponenets to a disadvantage .Boxing is really suffering from this we are seeing guys like Dominoc Wade being manditory  challenger to Golovkin,come on man this fight should never be taking place total mismatch. Gennady Golovkin is being cheated out of being P for P legend and a stunning middleweight legacy because holding a belt seems to more important to potential opponents than giving the boxing fans the fight they want we have seen other examples in Carl Frampton ducking a fight with Rigo , Quigg ducked Rigo before him .

Where next for triple G ? …well maybe Billy Joe Saunders will give him a unification fight I see he had tweeted about it but if I’m truly honest I don’t see it happening although it would be amazing to get Golovkin to the UK for a fight . I think a fight he should look at is is James DeGale at supper middleweight, DeGale won’t run from a fight infact DeGale’s work ethic as a fighter is brilliant and wants the same as Golovkin , the big fights and to build up a reputation in the US this could be a good option if the super fight with Canelo Alverez doesn’t move forward .