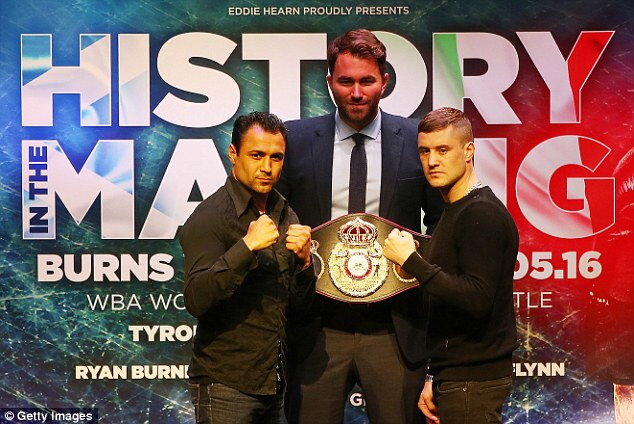 On Saturday the 28th May we have a chance of seeing history being made as Rick Burns (39-5-1 13loskos)! attempts to become a 3 weight world champion when he takes on Italian Michele Di Rocco (40-1-1kos18)in Glasgow for vacant WBA title stripped from Adrien Broner .

Let’s do So Rocco first:
I’m going to tell you right here this is going to be short and sweet because I’ve been doing my research on Di Rocco and cannot see how he’s getting a World Title shot. He came won bronze as at the European Boxing Championship back in 2002 as an amateur and also qualified for the Athens Olympics . Now if you look at this guy’s record you could be fooled into thinking the he has something but after sitting watching a couple of these fights on YouTube in what can only be described as little more than church hall bouts I found the guy to look good at the at the level he’s fighting at but this will be a massive step up in class for him up against Burns who’s fought and fought well at world level being a two weight World Champion. Di Rocco also doesn’t like to fight outside Italy having only done so twice before so on top of being out his depth he also has to contest a notorious Glasgow crowd of around 12,000 who will have the Hydro Arena rocking .

Now Ricky Burns:
I feel right now I should admit I am a massive Burns fan. Burns has worked his arse off trying to get himself back to the top of his game after a dip in form due to a broken jaw sustained in his Worls title defence against Beltran, the broken jaw which Burns sustained in the second round saw him hang on the full fight and take it to the cards in which he stole a draw ,now to take it to the judges showed the kind of heart burns has and saw him steal a draw, steal being the key word as Beltran clearly won to any normal person watching the fight. Burns did lose his next two fight to Terence Crawford and Dejan Zlaticanin hardly any disgrace in that ,Crawford being one of the best boxers on the planet,but Burns looked to be really paranoid about his jaw in these fights and looked like that might be the end of a great career .For me this notion of the end of Burn ended when he went to face the very talented Figueroa Jnr in Texas ,the fight I watched Ricky brought his A game and showed he still had the ability and fire in his belly, and for me win the fight comfortably but he fell victim this time to some dodgy score cards which gave Figueroa the win . Since then Burns has had to fight below his level trying to work his way back up the rankings and if he gets the job done against Di Rocco this will bring back the big fights to Glasgow and see Burns second coming .

I’m trying to look at this as unbiased as I can but can only see a Burns win by stoppage around the middles rounds,il put my neck on the line and say the 7th,I think Ricky will work his body and by the 7th he will have nothing left . Anything I’ve seen of Di Rocco I just think this is to big a step up and if he last to the 7th he deserves some credit.