Like most boxing fans I look at pro boxers as if they are superhumans,the way in which they can slip,glide,bob,weave shots whilst landing there own the whole time making it look like the easiest job in the world. Even before they step into the ring on fight night they have trained for months,100s of rounds of sparring,hours upon hours on heavybags,running,skipping having seen these guys first hand in training camp it really does blow your mind. Even away from the gym these machines literally starve themselves in the run up to the fight all to make weight and this is where the sport hits murky waters . When the body is being starved to make weight it eats into muscle mass so the longer someone might take to make weight the less power they will have come fight night, but lose the weight to rapid or to much weight and you will become weight drained, weak and no stamina , boxing is a sport where getting your diet right might not win you a fight but it can lose you one.

Enter the cheats , in boxing we have two kind of drug cheats, those who take banned substances to cut weight quick and those who look to increase there power through the use of banned substances .The most commonly used drug to cut weight in the sport is Clenbuterol and Ephidrine both of these drugs are used to treat asthma and there has been cases like Heavyweight boxer Shannon Briggs testing positive for these drugs after using them inadvertently in his asthma medication back in 2010 ,he got a 90 day ban,now I can believe this as Briggs as a Heavyweight boxer who doesn’t need to starve his body to make weight and is known for the amount of medication he takes to help with his asthma, so 90 days seems fair to me for the mistake but far to often this has become the party line for anyone caught cheating ,let me explain how this substances are abused by boxers .Clenbuterol and Ephedrine raise your bodies core temperature  0.5 to 1 degree which results in the body burning off excess energy (calories) so cheats or juicers if you like, can train harder on fuller bodies and still cut the weight comfortably . This puts there opponents at a massive disadvantage, in the build up to the fight the opponent’s bodies have been put through a lot more stress, they have been cutting down on intake whilst still training ,the juicers have been eating more and hydrating more whilst a drug gets them down to weight. Then we have the other more sinister drug  juicers use are anabolic like Dianabol and Stanozolo (there are many others but these are most common) these are more sinister for one reason ,they make the juicer gain muscle mass whilst losing body weight,when you equate that muscle mass will increase a boxers punching power dramatically this is not just a quick fix to gain an edge but an ugly selfish trick that could have serious consequences for the poor guy on the end of these synthetic power punches. For me this is the equivalent of putting a metal plate in your glove,this is easily the worst thing any professional boxer or even a man can do to another man and for me borders on serious assault .
Now you might be asking “how big a problem is doping in boxing ?” Well the heavyweight champion of the world Tyson Fury said :

“I can look at a man and tell you if he’s full of drugs by one glance at his body with his top off. “Boxing has got a big problem with drugs. But it doesn’t bother me because at the end of the day it’s about determination over drugs”

Although Fury might say it doesn’t bother him but I think his opinion might change if he was to lose to a juiced up fighter.

Why are more boxers not caught if it’s such a problem ?
Well these juicers don’t just take these substances and hope for the best these guys are advised by doctors who are light years ahead of the testing and screening process .These doctors understand the biology of the human body,they know how these banned substances can be masked,broken down and made undetectable by other legal medicines if took properly. The most famous case of use of these doctors was American cyclists Lance Armstrong’s secret doc ,Dr Ferrari who helped Armstrong avoid detection for years in a sport where drug tests are frequent and unannounced ,if anyone is thinking this can’t be applied to boxing then they are being very naive.

Now we as fans and boxers living within the rules are being let down miserably by the Governing Bodies the WBC,WBO,WBA and IBF seem to take the view of punishment for getting caught rather than take a hard line for cheating ,you might think that this is a ridiculous statement but just look at the these cases of drug cheats :
Erik Morales tested positive for Clenbuterol but instead of facing a massive ban and financial penalty the WBC just didn’t recognize the result , they didn’t cancel his world title shot ,he failed a drug test and went on to fight Danny Garcia.
Or
The case of Andre Berto who tested positive for norandrosterone (steroid) which increases testosterone which is why it’s banned for boxers. Berto was originally banned but after claiming his his sample  was contaminated he was reinstated and fought for a WBC intern belt,hardly pushing a zero tolerance .
One more example is Lamont Peterson a name which we all know who failed a drug test for the Amir Khan fight . He tested positive for synthetic testosterone which increases pretty much everything a boxer needs ,strength and endurance, how was he punished I hear you ask ,well the IBF let him keep his belt , the absence of backbone from the international governing bodies is shocking to say the least .

My view: We need Olympic style 365 days of the year 24hrs drug testing the kind that caught Vitali Klitchsko taking steroids forcing him to pull out of the Ukraine Olympic team, the kind of system that can show up at your home unannounced at 3am and ask for a sample this would make it much harder but not impossible for juicers as Lance Armstrong proved in cycling, there are ways round these tests but you need a sophisticated doping system to do so and these are hard to find and keep quiet .To go along with this system we need to see a unified approach by the Governing Bodies never mind 6 month bans like Lucas Browne just received  , it should be lifetime bans ,massive financial punishments,punishments that mean if you get caught cheating you face absolute ruin who would risk cheating then as I am writing this another elite boxer Alexander Povetkin has just failed a drug test after meldonium showing up in his sample,now when he failed the drug test the WBC took two days to decide to call off the World title fight between him and Deontay Wilder even now they are saying it may take place next year now …..fuck off .The truth is there is just to much money involved in boxing it doesn’t pay to ban these big names which means in 2016 boxing is probably the most corrupt sport there is with bent judges,doping boxers and governing bodies making it up a  they go .
We ran a poll on Twitter if punishments where to lienent and  asked our followers view

The vote was pretty  overwhelming ,here are a few some of the opinions we where sent 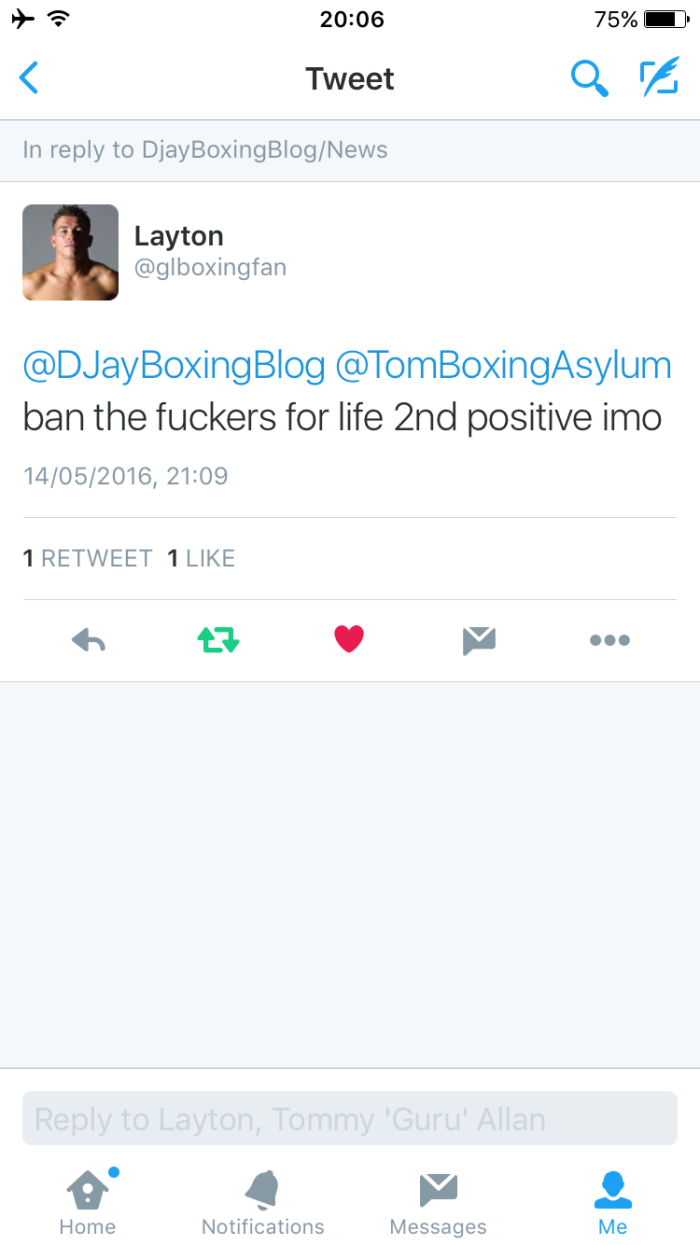