When people from the west of Scotland think about the Capital Edinburgh they think of a beautiful tourist destination , a castle fortress up on top of a cliff which casts a shadow over a city steeped in history . A place where you will see an image of Scotland that the country wants to project to the world  , even if not necessarily a true reflection of Scotland it is something that tourists from USA and Canada eat up . People from Glasgow or Paisley look across and think they see a different country with happy ,wealthy people and that somehow we are being given a raw deal , which is of course total bullshit .

Just a few miles from the city centre as you pass some traveler sites you will hit Nidrie ,a place you could easily confuse with with Glasgow’s Gorbals or Paisley’s Ferguslie Park , a place that will lay out all your misconceptions of this City in front of you and show them up as narrow minded . Just up a small side street you come up to an old beat up community centre . Inside there is an after school care providing a vital service and just behind that you will find Sandys Gym . As i arrived i was greeted by Kenny McCartney (Jason’s trainer) and as we wait for Jason to arrive me and Kenny talk Celtic,Rangers, Jason’s sparring with Ant Crolla and we also spoke about  Kenny and Jason’s trip to Norway . Jason arrives and after some small talk and the odd bit of banter we get underway . 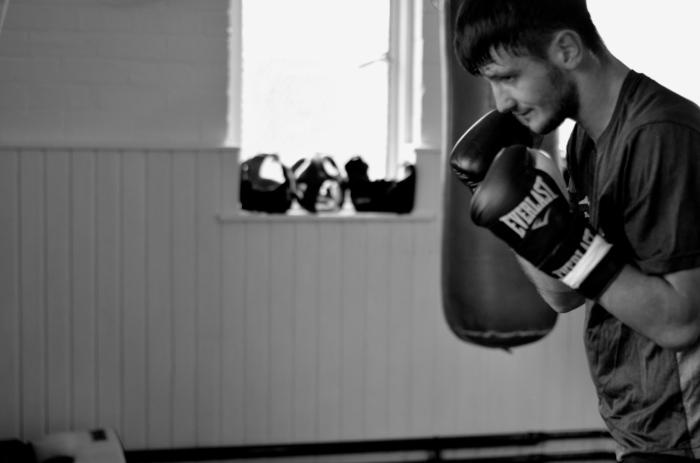 So Jason how is preparation going for your next fight ?

Everything is going really well, i am feeling fit and strong and I’m ready to go .

Your next fight is against Josef Zahradnik who is ranked No1 in Czech Rep but is bringing a bit of an unknown quantity in, have you seen anything of him ?

I ve seen him a couple of times , one of them against Philip Insingi and he took his 0 , but if you watch the fight it was a close contest , the boy (Insingi) isn’t a big puncher and left himself open so he can’t take to much credit for that. He’s good but whether he has the grit and determination we will find out next week.

*Before coming out to the interview i had asked Barry McGuigan about his recent signing Jason Easton and his plans for him , this is what he said .

“Jason Easton is very exciting with a crowd pleasing style, this young Super Lightweight is making great advances and has already won the IBO Title. In the UK the Super Lightweight division is red hot with Josh Taylor Jack Catteral Tyrone Nurse & Robbie Davise all vying for contention. There’s no reason why Josh and Jason can’t maximise there potential by winning various different Titles with the prospect of meeting each other further down the line.. You cannot put a price on the advantage a Terrestrial TV deal can give to a fighter. Channel5 can give you that advantage.”

Jason i have spoke to Barry McGuigan and he said he’s looking for you and Josh Taylor to pick up multiple titles with the potential of both of you fighting each other in the future , does that give you something to get excited about ?

In your last fight you fought Steve Jamoye which was a brilliant fight for the fans but the way you fought must have been giving Kenny fits . ( Jason looks at Kenny and laughs as Kenny just shakes his head at him)

Yeah i was stupid, i should have showed my ability a bit better but at the start of the fight i was just pacing myself for a twelve rounder but he (Jamoye) came out flying and got involved , which was stupid . He wasn’t really hurting me with any of his shots but i was stupid to take them in the first place . I learned a lot from that and Kenny had me back in right away working on basics , head movement and footwork and just feel i have improved so much since then .

You get so many guys now with padded records but you probably learned more in that one fight than some do in 16 fights .

Oh yeah big time , i didn’t expect the guy (Jamoye) to be that tuff , he made it a difficult fight at times . I expected to get him out of there a bit quicker but he just kept walking thru them and made it a good fight . Full Interview Uncut Here

I would just like to thank Jason for giving us his time to speak to us . Jason will be fighting on the Josh Taylor vs Vazquez undercard on 11th November which will be shown live on C5 and Spike (freeview) for ticket enquiries get in touch with Jason via Twitter on @JEastonn