Before we get started let me paint you a picture , lets roll back a few years , back to a summers night in Glasgow 2014 . There is an air of optimism surrounding the bout for the WBC International Lightweight title in Braehead Arena , a night where Ricky Burns was going to get his career back on track after a contentious draw with Ray Beltran that was followed up by the loss of Burns WBO Lightweight title to future P4P superstar Terrence Crawford .The general consensus was that Burns would win this fight and get into position for a shot at the WBC Crown, all that stood in Ricky’s way was Dejan Zlaticanin , a little known 18-0 fighter from Montenegro , Well we all know what happened next .

Dejan recalls “I can remember almost every detail from the moment i stepped in the UK . There was so much excitement , not just because i had a tough test against a two weight world champion , but also the same day my had wife gave birth to my daughter Sofija. I was so excited and i knew nothing was goin to stop me beating him (Burns) and devoting the win to her” . That was the night Dejan broke my heart , but that was also the night Dejan Zlaticanin announced himself to the boxing world .Dejan really took Burns apart in Glasgow that night , even dropping Ricky in the process , no one knew Dejan Zlaticanin when he came to Scotland , but everyone knew him when he left .

Winning the WBC Internatinal Title in Glasgow moved Dejan up the ranking and it wasn’t long before he was fighting for the real thing . In 2016 Dejan Zlaticanin beat Bolivia’s  Franklin Mamani for the Vacant WBC Lightweight Title , He says ‘When i beat Mamani i made history and became the first man from Montenegro to win a World Title, I touched the sky that night and the feeling was unbelievable “. One would be forgiven for thinking Dejan would be a superstar in his home nation , i mean being the first person from your nation to be World Champion is a massive achievement , monumental even ?. Well you could imagine my shock when i asked Dejan if after achieving what he had achieved , has boxing became more popular in Montenegro and if that was his legacy , he answers “No ! They didn’t respect my achievements like they needed to do . If i was from the UK i would get all that respect . You know I didn’t even win sports  man of the year award because of some law . People in Montenegro don’t know what it means to be WBC Champion of the world “. But Dejan doesn’t let that lack of acknowledgement stop him from giving back to the children of Montenegro  “My Brother and I open our Boxing Gym and we get a lot of kids in there , and that makes me happy as it keeps them safe and off the streets”

Once Dejan had won his World Title we seen the return of the “Champion in recess” Jorge Linares to the ring from a layoff with injury as “WBC Diamond Champion” who the WBC said should fight Zlaticanin to see who was the true champion of the division . This was a fight fans wanted to see but as time went by it became apparent that this was another case of a “Great Fight That Never Was” , Dejan says “Linares is a fighter who studies his opponents and will avoid them ,that’s what he did when he was supposed to fight me , that’s what he’s doing to Mikey Garcia now . Boxing fans don’t like that, he’s not an old school fighter ”  . Now that the Linares vs Garcia fight seems to have fallen through i asked Dejan if he would be trying to chase the Linares fight down for his return to the ring . “I would like to fight Linares , He doesn’t need to run from me now he’s seen i have a weakness ‘(referring to his KO loss to Garcia ) but i think he’s still scared to fight me , He knows i only need to catch him with one one good punch and fight would be over . We as boxers fight for the fans and give them the fights they want to see , if you avoid these fights that’s bad for boxing and means your not a real champion” 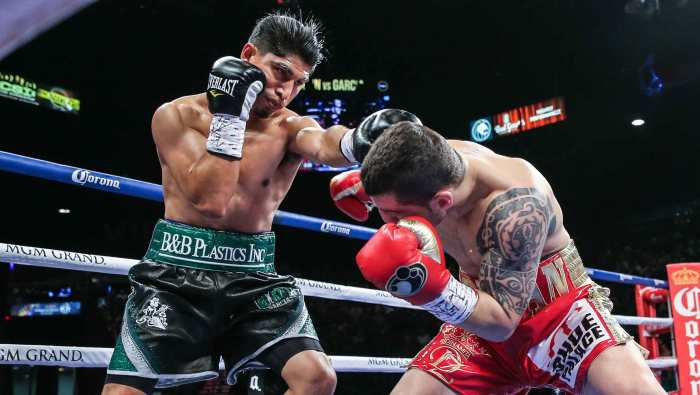 In Dejan’s last fight he had hit the big time fighting in the MGM Grand in Las Vegas , the Mecca of boxing against the returning Mikey Garcia “The MGM is incredible . It was unbelievable for someone from Montenegro like me to go there and fight ” .The very talented Garcia was on top form that night and scored a third round KO , Dejan tells “I just wanted Mikey to stand in the centre of the ring like a real Mexican and we could exchange punch for punch , bur Mikey was to smart for that and he deserved the win”.  But although Dejan accepts Garcia deserved his win , Dejan tells us he didn’t have the best build up to the fight “There was a lot of thing that meant I wasn’t going to be leaving Vegas the winner . I had some difficulties in camp but I didn’t want to pull out this fight , i am a fighter but this time it just didn’t go to plan” . Mikey Garcia is widely viewed as one of the best in the business , a real fighter who only wants the best fights , i asked Dejan what it was like to share the ring with Garcia ? . ‘                                    “Garcia is an excellent fighter , he’s very intelligent and a big puncher but he looked better that night than he actually is because i was not in my element . That night it felt like i had been hypnotised and worst of all i was slow , i really don’t know what happened to me in that ring , i felt like it wasn’t me in the ring that night “.

Dejan Zlaticanin is the kind of fighter that will always get fans tuning in , and i really look forward to his long awaited return to the ring . Dejan is the kind of boxer who will fight anybody and i cant help but think if Jorge Linares really wants to validate his CV here is a man ready and willing  .