It is that time of the year where we look back over what boxing has given to the fans over the past year and we pick our best bits and top performers of 2017 , and i must say what a year we have to choose from .

Fighter of The Year

There have been some outstanding performers this year in the ring . Vasyl Lomachenko has made guys like Nicholas Walters and Rigo quit after taking them apart physically and mentally and ending the year in most peoples P4P top 3 . Terrance Crawford is another who has had an outstanding year becoming the undisputed champion at 140lbs after stopping Julius Indongo , which seen Terrance Crawford finally get the credit he deserves from the boxing world . Another who had a stand out year was Mikey Garcia who started the year with a bang winning the WBC lightweight championship with one of the Knock Outs of the year against Dejan Zlaticanin , made more impressive with the fact that Garcia was coming back from a 2 year lay-off , then in his next fight beat Adrian Broner at light welterweight . 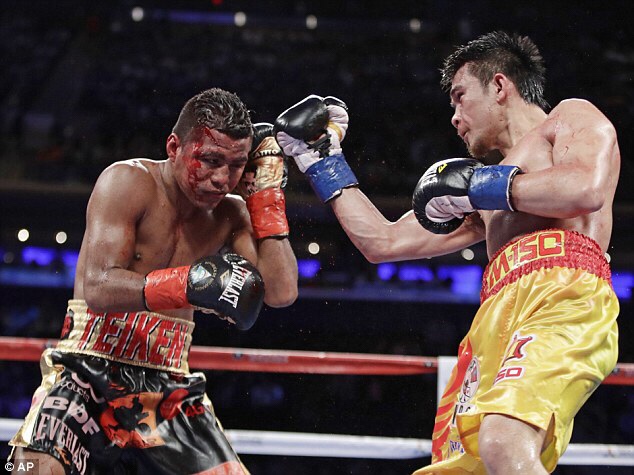 So who is my Fighter of the year ? Well for me it can only be one person and that’s Sor Rungvisai . At the start of of 2017 the man widely regarded as the P4P best fighter in the world was Roman Gonzalez , a four weight world champion who was 48-0 before he met Thailand’s Rungvisai . Many thought Roman would have to much for the challenger but those thoughts where soon dismissed as Rungvisai sent the champion to the canvas early on . Both men battled to the very end but the judges had seen enough to award the Rungvisai the win and give Gonzalez his first ever loss as a pro . Fast forward six months and the pair where at it again in the rematch , again most had picked Roman Gonzalez to get his revenge and again Rungvisai proved the doubters wrong , and this time in emphatic fashion . He didn’t just beat Gonzalez this time , this time he Ko’d the Nicaraguan in emphatic style . Well done Srisaket Sor Rungvisai and i for one cannot wait to see what 2018 brings for him .

Fight of The Year

In 2017 we seen some of the biggest and best fights in years being made , fights like GGG/Canelo Garcia/Thurman even the highly anticipated rematch between Ward/Kovalev but the none of them could hold a candle to my winner .

Back in April we seen Anthony Joshua face his biggest test to date when he took on Former World Champion Wladimir Klitschko infront of a sold out Wembley stadium . The Heavyweight division has not been a division renowned for classic fights in recent memory but that was all about to change . Klitschko now at 42 years old and coming off a 18 month layoff after his shock defeat to Tyson Fury had us all wondering what he had left , well we where not wondering for long . From the off we seen a more mobile Klitschko than in the Fury fight , bouncing on his toes and using the full ring . Joshua was working the jab well in the early rounds but he was being forced to work every minute of every round , something the IBF Champion wasn’t used to . Joshua sent Wlad to the canvas in the fifth as the signs looked to be there that AJ could be on the brink of putting this legend away relatively early but that wasn’t to be the case . Klitschko picked himself up and really started turning the screw on Joshua , who was looking to be feeling the pace . In the Sixth it was more of the same from Klitschko who returned the favour and sent AJ down for the first time in his pro career . The signs looked ominous for AJ who was staggering around the ring and clinging on for the next few rounds , this fight really did look to have swung right round in Wlad’s favour . Joshua did start to stem the flow and as the balance of the fight evened out again it looked as though this one would need to be decided by the judges but that wasn’t to be the case . In the eleventh Joshua had fully recovered , and timed Klitschko coming in with a fantastic upper cut which seen the Wlad go into survival mode , heaven only knows how he stayed up , but he couldn’t survive for much longer as AJ sent him down for the second time , Klitschko did get up but the ref stopped the fight not long after ……what fight …..what a win for AJ .AJ vs Klitschko

Prospect of The Year

For me this is my favourite part , picking a young fighter who has set himself apart from the rest , showing he has the potential to push on to bigger things in 2018 .

There has been one young prospect who has impressed me above all the rest and that is Edinburgh’s Jason Easton . It has been a massive year for Easton (26) with three fights , each harder than the last .The first of the trio was against a Zoltan Szabo and Jason wasted no time in dispatching the Hungarian , stopping him in the second round which is all the more impressive when you think it took Robbie Davies Jnr nine rounds to stop Szabo . Up next was Steve Jamoye for the IBO Intercontinental on the Josh Taylor/Ohara Davies undercard . After a tricky start Jason took control of the fight showing some real grit where other mentally weak boxers might have crumbled , getting his reward by stopping the tough Jamoye in the the ninth round , a win which has seen Cyclone snap up Easton . Jason Defended his IBO Intercontinental title against Josef Zahradnik of the Czech Republic. At a packed Royal Highland Centre in Edinburgh the crowd went wild for Jason as he outboxed and outfoxed his opponent whilst protecting a cut above his eye . Jason showed a maturity and that lessons had been learned from the Jamoye fight . When you think of the progression and opponents Easton has took on in 2017 you have to sit back and admire him as there aren’t that many 11-0 prospects taking the kind of fights and learning the kind of lessons he’s learning , i think 2018 could see big things happen for Jason Easton . Easton vs Jamoye MUST WATCH

Trainer of The Year

Trainer of the year is a is a difficult category to judge as there is so many factors to consider across a few subjects . Last year i thought Shane McGuigan had a fantastic year and has also had a very good 2017 but with Carl Frampton losing to Leo Santa Cruz in January , i think that rules him out of this year , had Frampton won then he may well have got the nod from me . This Year a trainer who has impressed me is Derrick James . 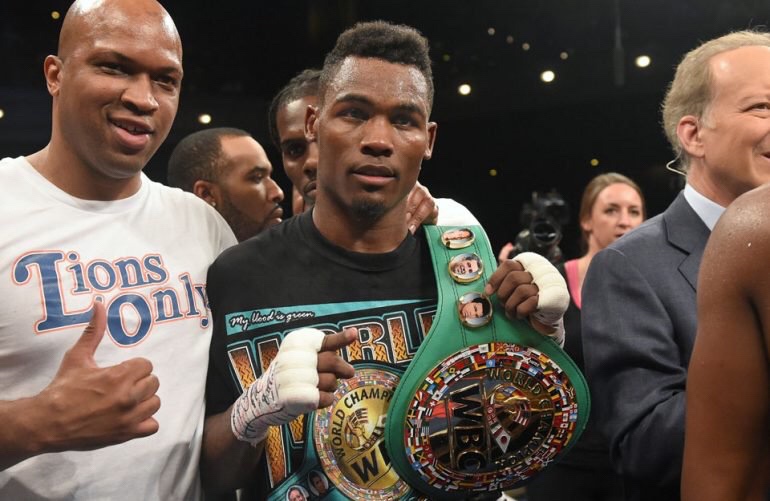 Some might think this is a strange choice but when i look at how Errol Spence Jnr and Jarmell Charlo have progressed over the past year i cant see how anyone else comes close . Spence is a superb talent and had been progressing nicely since the olympics but when he got his shot at the IBF Welterweight World Title against Kel Brook in Sheffield , no one really knew what to expect from Spence as this was his biggest test to date but you wouldn’t have known by the way he took the very experienced Kel Brook apart forcing him to quit due a fractured orbital bone late in the fight . Also fighting under Jame’s watchful eye is WBC Light Middleweight Champion Jarmell Charlo who since hooking up with James has looked to assert himself on fights more , and really does look like a killer in the ring with superb KO wins over Charles Hately and Erickson Lubin , both absolutely superb wins .