The boxing world was rocked to its core this week as 31 year old Scott Westgarth lost his life due to injuries received in the ring , the second boxer to do so in 2 years after Mike Towel passed away in 2016 . At times like this you see the boxing community come together in grief and reflection fighters and fans alike . You see professional boxers who understand the risks they take every time they step in the ring come face to face with there deepest fears , For fans like myself it makes me question how i asses these guys , the words i might use to criticise a performance totally disregarding the risks these guys take every time they step foot in the ring .

Just like two years ago when Mike Towel passed away a great tragedy has been met in some corners with stupidity and utter disrespect . Every time we see something serious happen in the ring out come these main stream press types who don’t follow boxing trying to start campaigns to get other non-Boxing fans to back calls to have the sport banned . 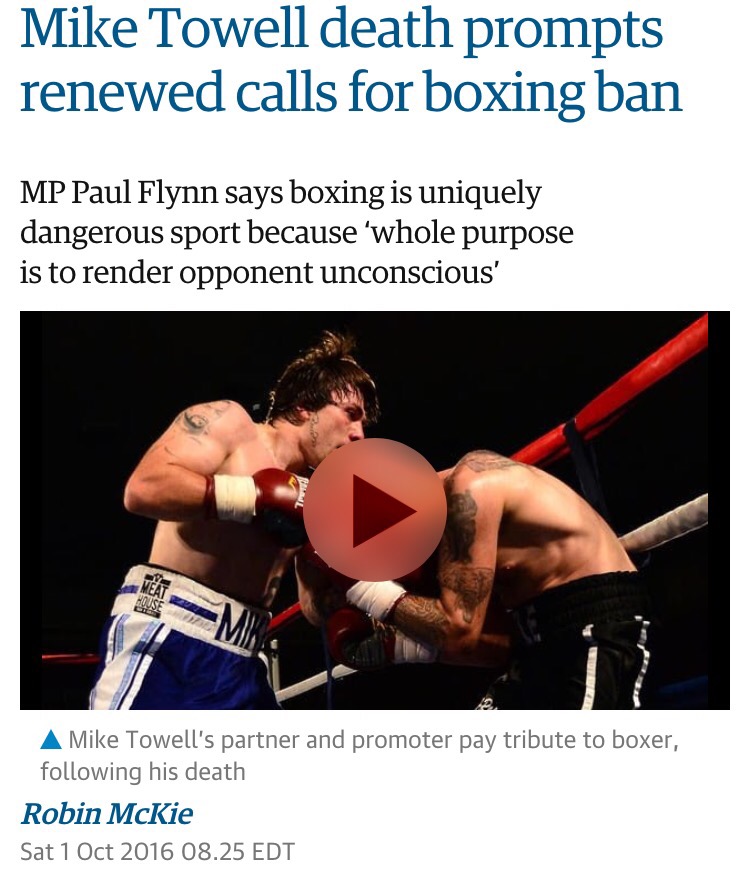 These boxers knew the risks before they stepped in the ring on those fateful nights but they done it anyway and as most small hall fighters will tell you its not for big money , its for there love of the sport and to call for boxing to be banned is disrespectful to their memory . Let’s look at this in another way , we have had two tragedies in the past two years here in the UK but before Mike Towel it was over ten years without a fatality . Now going round Boxing Gyms to interview guys you hear and see how many lives it saves . I spoke to Sean Masher Dodd a few months ago who informed me that before he was boxing he was drinking and taking drugs , losing control of his life . When Sean was in his early twenty’s he went to a boxing gym and enjoyed himself , now he is the commonwealth champion and lives a clean life all due to boxing . Boxing clubs are also vital to communities , In one of Edinburgh’s rough areas there is the Craigmillar Boxing Club which boasts Jason Easton , but if you go into the gym on a weeknight you will see the gym packed out with local kids from the area in there learning how to box , keeping them off the street and out of trouble . Boxing is filled with heart warming stories , these people that want to ban the sport know nothing about this side of it . When they see boxing they don’t see the gentlemen’s Sport , they don’t see Supreme Athletes or the sweet science , what they see is thuggery .

All of the above has been eclipsed by the actions of Tyan Booth this week . Booth , a fellow professional has seen fit to tweet out about people wanting to see him die in the ring . As he felt the backlash Booth dug his heels in and refused to delete or apologise for his actions . Then on Tuesday night he took it to new depths when Curtis Woodhouse told him what he thought about his disrespectful tweets to which Booth replied

The BBBofC has took action and suspended Booth for bringing the sport into disrepute , but there are some fans that want him suspended permanently and although i think that would be very harsh i don’t see any promoters touching Booth , his career will be all but over . Was this a cry for help by Booth ? Who knows but with the situation still being so raw it is hard to find any sort of compassion for him , but i will leave you with this thought ……If this was a cry for help can we afford not to give Booth the benefit of the doubt .