Fury vs Wilder Could Leave AJ Out In The Cold

Just when you thought that boxing was becoming predictable the news broke that Tyson Fury and Deontay Wilder are in advanced talks to make a fight for later this year , in a move that would leave the big money man and unified champion Anthony Joshua in the unusual position of being locked out of one of the biggest heavyweight fights in this era . Now right from the start I will say this story has broke from two of the most unreliable sources in boxing , Tyson Fury and Frank Warren but the reports coming out of the US is that this is more than just hot air. 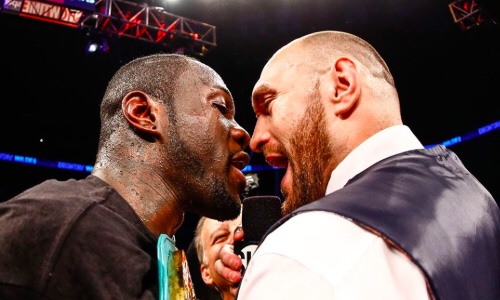 It is no secret that Deontay Wilder was infuriated by how negotiations went when trying to secure a fight with Anthony Joshua for all the titles . I have listened to guys like Lance Pugmire of the LA Times say they would not be surprised if AJ/Wilder never happened and that’s what came to my mind when this news broke , Is this an attempt to cut AJ out altogether ? . There is no doubt that the biggest fight financially in the division is against AJ but the next biggest fight financially is Fury/Wilder, A fight that would provide career high payday’s for both .

This could also be a case of Team Wilder showing AJ they have other options , which might bring Hearn back to the table with the instructions from Joshua to get the fight made , which i have to admit is a real possibility .

But what if this all comes off for Fury/Wilder , where does that leave AJ ? . Well the AJ extremists will have you believe that AJ doesn’t need either , and in a way they are right as he could sell out a stadium if he was fighting me ,but these people don’t understand the sport of boxing . AJ needs competition to create a legacy and this fight would leave him rummaging through the bones of the division looking for a top fight . Chances are that Wilder would insist on a rematch clause so potentially he and Fury could be occupied for the next year .

I will go back to what i said at the start and admit this could be all hot air or a ploy to get Hearn and AJ back to the table . In a way i want this fight to come off , I want boxers to see that if a massive fight is there to be made you don’t mess around with it , you don’t play with your food ,you don’t treat fans with utter contempt and put the fight off until your advisers give you the okay .