There is an old saying that an old boss of mine used to use ” If you fail to prepare , then prepare to fail ” and at the time it used to rile me but after seeing how Frank Warren has handled this whole Carl Frampton fighting at Windsor Park in August , i am now finally starting to see wisdom in his words . After Frampton beat Nonito Donaire in his last fight it was announced that Carl would be fighting next in Windsor Park on the 18th August . At the time it had a lot of us thinking who is it going to be as most other real contenders already had fights scheduled and would not leave a lot of time to turnaround . 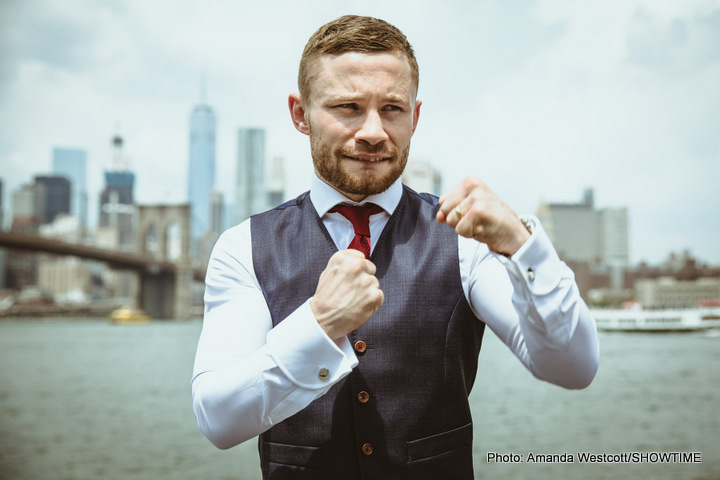 It had been expected that Warren was hoping that the winner of Warrington/Selby would come through unscathed , even Carl Frampton was ringside to call out the winner which suggests to me that even Frampton thought this was the case . After Warrington beat Selby he looked to be up for a quick return to the ring in Belfast but Frank Warren soon put that to bed in the post fight media conference ……So what now ?

World Champion Leo Santa Cruz will also be busy when he takes on Abner Mares , who is another top ten fighter in the division . Garry Russell Jnr just fought another top 10 contender in Jo Jo Diaz last weekend which would all but put them out of the running  , There was talk that Kid Galahad might be drafted in but word is that Galahad will be served up to Josh Warrington as mandatory  . Oscar Valdez is recovering from a broken jaw he received against Scott Quigg …..Well there is Scott Quigg who would love to have a rematch with Frampton but there is the small matter of him being an Eddie Hearn fighter and with no title on the line I’m sure Hearn would rather see this show fall apart than let his man save it . One go my friends made a decent prediction that it could be Rigo at a catchweight but i doubt that Carl wants that . 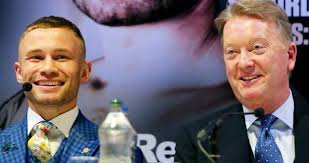 My big fear is that Frank Warren is looking to cash in on Frampton’s fanbase and take advantage of his thousands of die hard fans . The fact is that an opponent has to be named soon to give sufficient time to have a proper camp and the closer it gets the more it is looking like it is going to be an inferior opponent . Frampton said he signed with Warren with the guarantee that he could fight at Windsor Park so i think that puts any talk of this show being cancelled to bed , especially when you factor in that if and when Frampton/Warrington happens it will be in Leeds and not Belfast as Warrington is World Champion and a massive draw himself , whilst Frampton fans have proved in the past they will travel in there thousands . I fear the backlash Warren and Frampton could receive if they don’t pull a rabbit out of the hat here .

There are some sporting events across the world where the crowd are not only part of the show , but very often they become the show . Crowds where the combination of passion and desire awakes the inner caveman in us as human beings . Here in Scotland we have the Old Firm game between Celtic and Rangers , In Spain there is the El Classico between Barcalona and Real Madrid and even in Holland , the most chilled out country in the world there is the De Klassieker between Feyenoord and Ajax . This weekend we will see that special atmosphere in Belfast when Carl Frampton takes on Nonito Donair at the SSE Arena which will be live on BT Sport .

Nonito Donaire comes from the same island in the Philippines as boxing superstar Manny Pacquiao but as a child he and his family moved to the US . As is the case with so many poor immigrant children Nonito suffered terribly at the hands of bullies which is why he took up boxing . Over the next 20 years Donaire went on to become one of the top P4P fighter’s in the sport . With his skill , speed , power and aggression Donaire has really been a fans favourite over the years . Now at 35 years old Donaire is not the monster he once was , as is the case with every great fighter throughout history , time has ate away at this future ” Hall of Fame ” boxer but i am sure that what is left is still very capable of causing an upset this weekend . For me Donaire has the best left hand in boxing , whether it comes in the way of an upper cut or left hook it will land with devastation , but this is not to take anything away from his right hand which is also a great equaliser . Donaire of old was the perfect all round fighter who could fight off the front foot and back foot which made him a nightmare for opponents to figure out but now as time goes on his reflexes and ability to let his hands go have greatly diminished . This weekend Donaire will be asking himself for one last great performance and who would bet against him producing it .

Carl Frampton is one of the most popular fighters in the British Isles , a lad who can bring the divisions of N Ireland together when he’s fighting  , a guy who on fight night even us here in Scotland will come together in song and celebration and that is the power Carl Frampton . Frampton fights are rarely dull due to his open and exciting style which see’s him throw punches in bunches , switching between head and body then getting out of danger before his opponent has the chance to counter . Frampton did have power to go along with his combination punching but since moving up to featherweight the power didn’t come with him , now he look’s to break opponents down with accumulative shots rather than that one big punch . The past couple of years have not been easy for Frampton since losing his World Title to Leo Santa Cruz he has fallen foul to management disputes , dispute which are still going through the courts today . He also split with highly rated trainer Shane McGuigan over the same incident which seen Frampton sit idle for ten months . After teaming up with trainer Jamie Moore , Frampton fought Horacio Garcia on his comeback . An unknown Mexican that most of us hadn’t heard of , a fight most of us expected Frampton to walk but when Canelo Alvarez had made the journey over to Belfast it should have been a warning sign that this guy wasn’t here to roll over  . Carl had to dig deep in the fight after hitting the canvas to come back and win the fight on the cards in a fight which at one point looked to be slipping away from the irishman  . It has to be said that Carl Frampton looks in fantastic shape going into this one and with Donaire having such a big reach advantage over Frampton , he is going to have to work hard and hit hard once in the inside and looks to have given himself every chance of doing that  .

This is a really hard fight to call as we don’t really know where both fighters are at the  minute . Yes Donaire is on the slide but has he slid enough for Frampton to be to much for him ? . Was Frampton’s last fight just a little ring rust or has Frampton peaked aswell ?. I believe Donire has a good 4 or 5 rounds left in him where he will be immensely dangerous , especially as Frampton can be easy to hit . I feel this is a fight where we could see both guys hit the canvas and i also think this is a fight where both fighters will be out to prove people wrong , and that always makes them more dangerous . I think Donaire will start this fight strongly but he will start to fade badly after the fourth . Frampton has been working with Man City’s strength and conditioning coach for this one  and i think it will pay off going into the last third of the fight , where Frampton will get a stoppage .