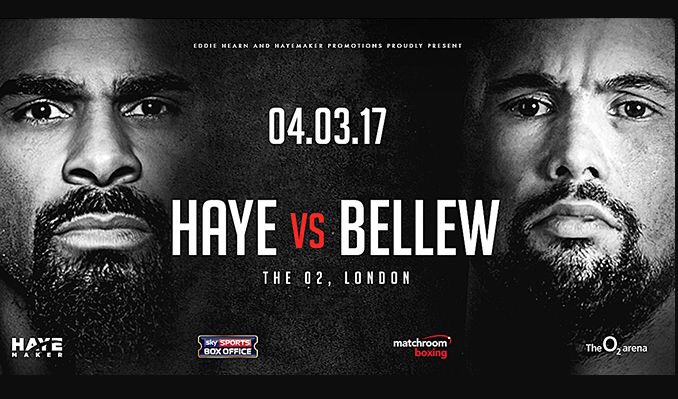 So its here, the latest sky sports box office hype job of David Haye vs Tony Bellew will take place later tonight , and i have to admit the bombardment from the sky propaganda machine has even worked on me . Since this fight was announced I’ve viewed it no more than a exhibition fight, how can you not , Bellew is a average size cruiserweight coming up to  heavyweight to face a Haye, who is still at this ripe old age is top 5  in the division , but that won’t put me off watching .

David Haye has been one of the UKs best heavyweights for years and will be going into this fight the faster, bigger, stronger of the two if he is 100% fit, and thats what this fight boils down to , Is Haye injury free ? . I have tried to take no interest in the WWE style trash talk and try to focus on how Haye looks in training, but the videos that are available are short and sweet so we don’t really have any real indication of how Hayes training . Also Haye did admit to going to Germany to get checked out to make sure he was fit to fight but i wouldn’t read to much into this . A more worrying thing for any Haye fans is that this will be Hayes first real competitve fight since he beat Chisora in 2012, this is where Tony Bellew does have a slight edge on Haye. 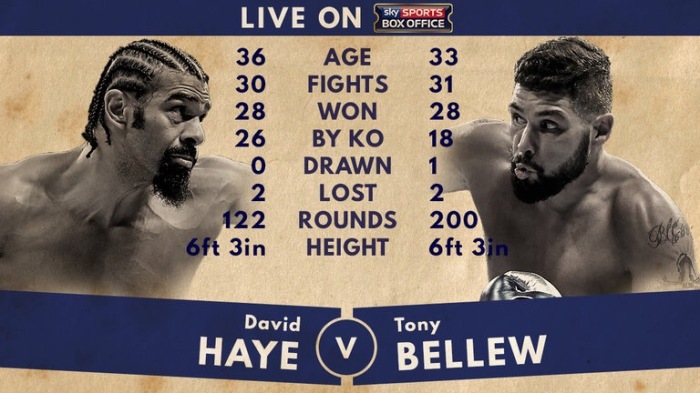 Tony Bellew will be coming into this fight a massive underdog in most peoples eyes . At yesterdays weigh in he looked quite flabby next to the well sculptured body of Haye . But Bellew is confident he can drag Haye into a dog fight and he belives this is where he can beat him , and I’ve got to give Bomber Bellew credit here, since starting to train with Dave Caldwell he has improved dramatically in every aspect, now even living up to the name “Bomber”but does he have the power to trouble Haye ? ….i doubt it . I also believe the Bellew camp are putting to much stock in Haye’s fitness as a David Haye fighting at 50% should still be to much for Bellew . For me i think Bellew should run for the first five rounds and come on strong the second half of the fight, a risky tactic but one that could use Hayes inactivity against him.

Prediction; Well this a case of choosing with the heart or the mind, The mind says Haye is a far to much for Bellew, the power and speed of Haye will see him KO Bellew inside 5 rounds . The heart well that beats a hatred for Haye , Haye is the embodiment of everything thats wrong with boxing . The guy is little more than a whore who will milk his fans without thinking twice ,and even tho i might have a betting slip with his name on it ,there will be nobody happier than me if Bomber Bellew can pull it off .